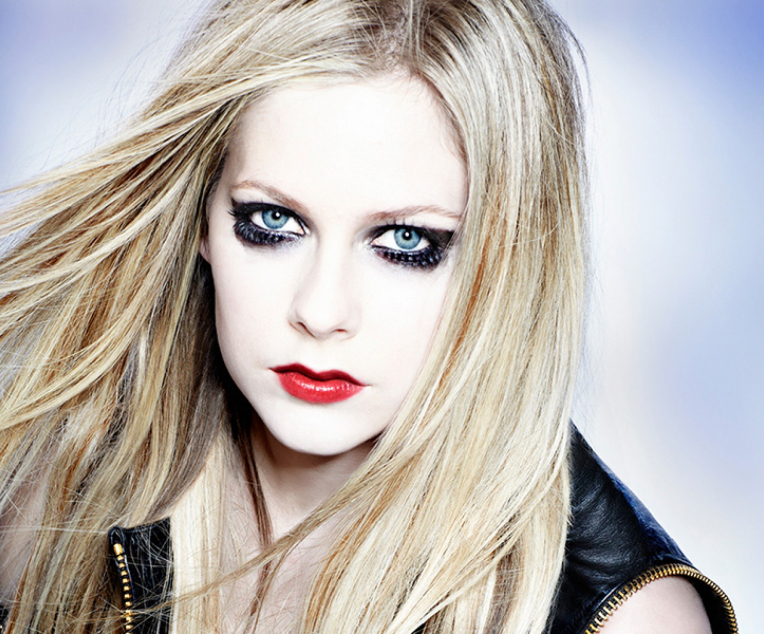 When singer, songwriter, and musician Avril Lavigne first burst upon the music scene at age 17, she was known as a young, pop-punk tomboy who refused to resort to skin-baring come-ons, preferring to entice the record-buying public with her powerhouse voice, high-spirited melodies, and straight-talking lyrics. Staying steadfastly true to herself and putting music before image paid off both critically and commercially for the Canadian-born artist. In 2002, Lavigne shot to global pop stardom with the 6x-platinum Let Go, followed by 2004’s 3x-platinum Under My Skin, and 2007’s platinum The Best Damn Thing. Over the course of her three albums, Lavigne scored a string of international hit singles: “Complicated,” “Sk8er Boi,” “I’m With You,” “Losing Grip,” “Don’t Tell Me,” “My Happy Ending,” “Nobody’s Home,” “Keep Holding On,” “Girlfriend,” “When You’re Gone,” “Hot,” and “The Best Damn Thing.” She earned eight Grammy Award nominations, won seven Canadian Juno Awards, and sold more than 30 million albums and nearly 20 million tracks worldwide over the past eight years.

Lavigne also launched a second career as an entrepreneur by creating a well-received fashion and lifestyle brand (Abbey Dawn), two fragrances (Black Star and Forbidden Rose), branched out into film work (Over the Hedge, Fast Food Nation), and further committed herself to the philanthropic activities she’s participated in over the years by establishing The Avril Lavigne Foundation, which works in partnership with leading charitable organizations to design and deliver programs, raise awareness, and mobilize support for children and youth living with serious illnesses or disabilities.

With her multiple creative endeavors and impressive musical success, it’s worth pointing out that Avril Lavigne is all of 26. She may be young by veteran performer standards, but she has evolved as a person and as an artist since releasing The Best Damn Thing. Lavigne brings the maturity and insight she’s gained from her experiences to her next labor of love, her fourth album, Goodbye Lullaby, which will be released by RCA Records in March 2011.

“I pushed myself and didn’t hold back,” Lavigne says of Goodbye Lullaby for which she wrote or co-wrote every song, and wrote and produced two — “4 Real” and “Goodbye” — entirely on her own. “I allowed myself to be vulnerable. I think it’s during the real moments that people can relate the most. Those who have heard the album have had very strong emotional reactions to the songs, so I realized that when something is so real, it will probably touch somebody. The beauty of music is that it’s open to interpretation.”

Written at various stages over the past few years, Goodbye Lullaby is filled with appealingly relatable, heartfelt songs that convey a variety of emotions and reflect a bittersweet mood not generally associated with Lavigne’s best-known tunes. Except for the anthemic first single, the irresistibly feisty “What The Hell” and “Smile,” which create a perfect bridge from her previous work, the remainder of Goodbye Lullaby finds Lavigne exploring what it means to push through the tough times and emerge stronger for it — a theme apparent on songs like “Everybody Hurts,” “Push,” “Remember When,” and “Wish You Were Here.”

“Overall, the album is about how we all go through difficult experiences, whether it’s ending a relationship, losing a job, or just missing someone,” Lavigne says. “We get through it and we grow.” Nowhere is this feeling better expressed than on “Goodbye,” a delicate piano-and-string ballad that closes out the album. “’Goodbye’ is the most raw and vulnerable track I’ve ever written and recorded in my career,” Lavigne says. “It’s a very special song because I wrote and produced it myself. It’s so real and truthful. You can’t fake that.”

Goodbye Lullaby’s intensity is balanced out by its instrumentation: bright, rich textures of acoustic guitar and piano, as well as an orchestra on “Darlin’,” “Remember When,” and “Goodbye.” Through it all, from the upbeat pop tracks to the mellower ballads, Lavigne’s voice is front and center, summoning up and soaring easily through the emotion that her lyrics require.

“This album is all about me being a singer, a songwriter, and a musician,” Lavigne says. “Typically the lead vocal gets buried in the track and you can’t always hear the quality, character, or emotion after a certain point. I wanted my voice to be the main instrument. It forced me to really throw myself out there. I still love rocking out, but I wanted this record to show a different side. That’s why I produced some of the songs myself, which I never thought I’d do.”

For the rest of the album’s tracks, Lavigne turned to her longtime friends and collaborators Evan Taubenfeld and Butch Walker, as well as Max Martin. Another important influence was Sum 41 frontman Deryck Whibley, who lends his production skills to several tracks, including “Darlin’,” — a song Lavigne wrote at the age of 14. “Whenever I hear ‘Darlin,’ I think of the family room I wrote it in and playing it for my mom,” she says. “So it’s really special for me to have it on the album.”

A small-town girl from Napanee, Ontario, Lavigne had already been writing, singing, and performing for a few years before releasing her breakthrough album, Let Go, which featured the smash singles “Complicated” and “Sk8r Boi” and sold more than 16 million units worldwide. Her second album, 2004’s Under My Skin, debuted at No. 1 on the Billboard Top 200, and sold more than eight million copies worldwide fueled by the hit singles “Don’t Tell Me” and “My Happy Ending.” Four years later came The Best Damn Thing, which featured the No. 1 single “Girlfriend.” Lavigne’s biggest record to date, “Girlfriend” was the top digital track of 2007, selling more than 7.3 million downloads in eight languages. The Best Damn Thing included the epic ballad “Keep Holding On,” which Lavigne wrote at the request of 20th Century Fox for the studio’s fantasy/adventure film Eragon. Lavigne’s songs have also graced the soundtracks of such feature films as Sweet Home Alabama, Bruce Almighty, Legally Blonde 2, The Princess Diaries 2, and The House Bunny.

In 2010, Lavigne wrote “Alice” for Tim Burton’s film fantasy Alice in Wonderland, which was included on the compilation album Almost Alice, released in March. The video for “Alice,” directed by David Meyers, depicts Lavigne’s own adventure down the rabbit hole. She also brought her fashion brand into the mix, designing “Alice in Wonderland” pieces for Abbey Dawn that were sold in stores in connection with the film’s release.

It’s been a whirlwind journey for Lavigne, who says the thing she’s looking forward to most about releasing Goodbye Lullaby is getting the opportunity to hit the road and perform for her fans around the world. “My fans are hardcore,” Lavigne says. “They are very dedicated and really supportive — the kind of fans who stick around. It’s been an amazing experience meeting them after shows and reading their letters, because the things they’ll say to me are very special. People have come up and started crying, saying, ‘You have no idea what your music has done for me.’” That’s all I need to hear. If I can give even one person strength through my music, that’s pretty frickin’ special.”