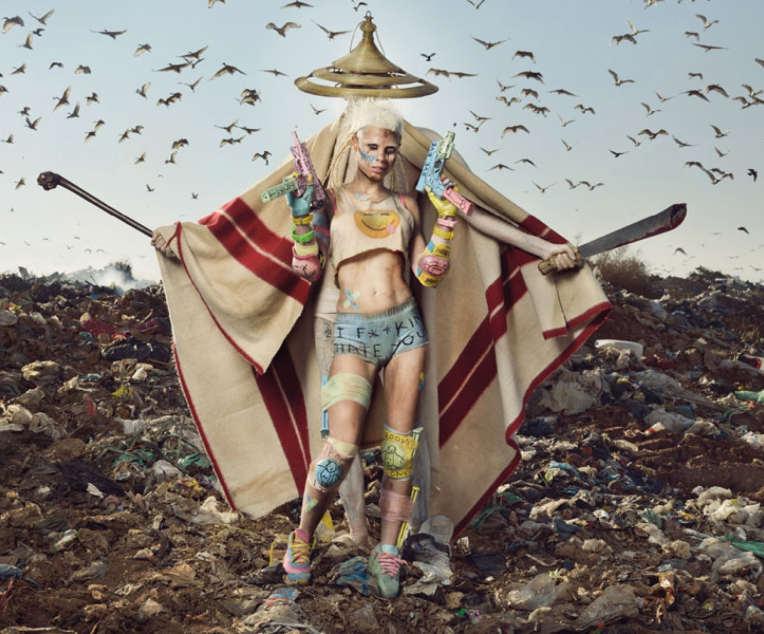 Emerging from Cape Town, South Africa, the electronic hip-hop duo Die Antwoord struck Internet viral gold with their video hit "Enter the Ninja," but they're really conceptual artists Watkin Tudor Jones and Yo-Landi Vi$$er presenting their "inner zef." Before assuming the roles of Ninja and Yo-Landi for Die Antwoord, the two were involved with satirical projects like MaxNormal.TV -- which saw them wearing three-piece business suits and delivering motivational hip-hop -- and the Constructus Corporation: a hip-hop fantasy group based around a comic book called the Ziggurat. The idea for a more vulgar rave-rap group began in 2008, but it wasnÂt until a year later that Die Antwoord -- which is Afrikaans for "The Answer" -- began playing live.
Their early stage shows were outrageous, with Yo-Landi baiting and flipping off the audience, while Ninja rapped and danced, wearing only his trademark Dark Side of the Moon boxer shorts. That same year they recorded their debut album, SOS, and introduced "Zef," which fused hip-hop, electro, and rave music. A year later, the videos they created for the tracks "Zef Side" and "Enter the Ninja" became viral hits. The latter featured Leon Botha, an experimental South African artist and one of the worldÂs oldest survivors of the premature aging disease progeria, who appeared as the group's DJ. "Enter the Ninja" cracked the British Top 40, and major-label Interscope soon signed the group and released their 5 EP in July of 2010. That October, the label released a revised SOS with a world tour following. The group left Interscope the next year when the two parties couldn't come to terms on their next album's lead single. Left to their own devices, Die Antwoord chose "Fok Julle Naaiers" to lead up to their sophomore album, released by their own Zef Recordz and distributed by the Diplo-associated imprint Downtown. The year 2012 saw the release of the non-album single 'XPÂN$IV $H1T," while the singles "Cookie Thumper!" and "Pitbull Terrier" landed on their 2014 album Donker Mag, which topped the Billboard Dance chart and peaked at number 37 on the Top 200.
The duo returned in 2016 with Suck on This, a mixtape intended as an appetizer for their then-titled LP We Have Candy. Featuring production by Cypress Hill's DJ Muggs, G.O.D. (aka DJ Hi-Tek), and the Black Goat, Suck on This included the single "Bum Bum" and the rave-house "Gucci Coochie" with Dita Von Teese. Later that year, they released Mount Ninji and Da Nice Time Kid, their fourth full-length. With production from G.O.D. and the Black Goat, the LP featured appearances by Cypress Hill's Sen Dog, Lil' Tommy Terror, and Jack Black.