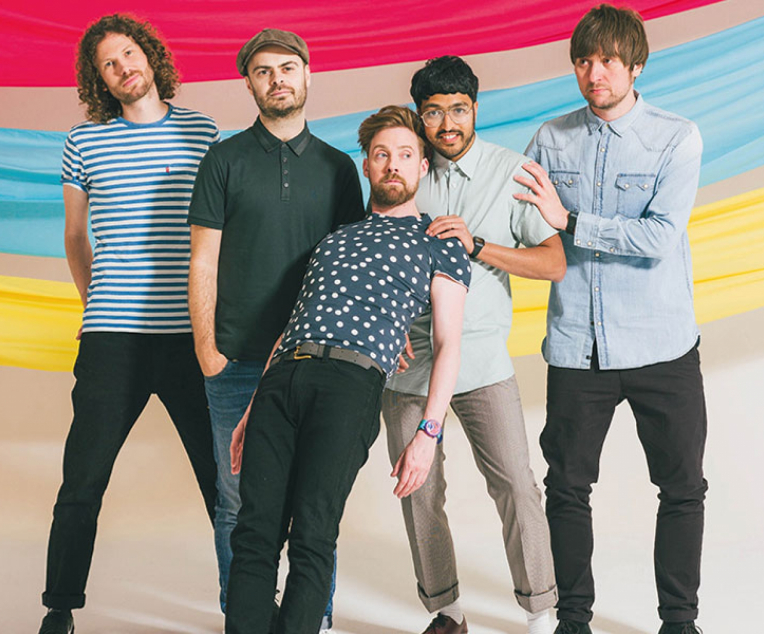 Things could so easily have stayed the same. After more than 10 years, four albums, platinum record sales, a volley of top ten singles and 3 Brit Awards, it would have been simple for Kaiser Chiefs to sit back and coast a while, to enjoy the warm glow of being one of Britain's most cherished bands.

But in late 2012 there came a change: the departure of founder member and drummer Nick Hodgson. Yet an event that might have derailed the band entirely instead it lit a fire that has carried the Kaiser Chiefs forward, through a period of re-evaluation and reinforcement, to create an album that is their most considered, literate, and impassioned record to date.

Education, Education, Education & War began out of frustration. The band's remaining members, lead singer and lyricist Ricky Wilson, bassist Simon Rix, guitarist Andrew White and keyboardist Nick Baines, decamped to Real World to see if they could kindle something new. In the days that followed, the sense of neutered creativity gave way to something thrilling and unleashed. By the end of that week, Rix recalls, they had "Nineteen or 20 ideas for songs." And more importantly, Wilson says, "We had the spark that gave us hope."
"At first the songs came from a very personal anger," explains Wilson. "But then I thought back to what I'd enjoyed writing about in the beginning, with Employment, and what I enjoyed then was looking around and writing about what I saw. And so over the next year I began to write songs about living in this country, about the thoughts that inspired in me."

It is an album that takes the temperature of a nation seven years into a recession, people desperate for work, debt-ridden, suspicious of corporations, big business, government, and eager for signs of compassion, understanding, hope. In the centenary year of the First World War, it also questions the role and importance of modern conflict, the wars waged in Afghanistan and Iraq, the diminished power of an Empire. "I'm not saying it's political, it is about the feeling of futility… about wondering 'what is the point?' Not in a way that means giving up, but in a way that raises a question I want to ask. I don't think a band has a responsibility to say anything more than love songs, but if it's in your mind more than love songs then stop writing love songs and start writing songs about what's going on in your street."

The Kaiser Chiefs that emerged from near-collapse in 2012 appear regalvanaised, bolstered by the addition of a new drummer, Vijay Mistry [formerly of Club Smith] and inspired by a new sense of freedom and musical possibility. They are angry, yes, but they are also inspired and ambitious and hungry for success.

The album was recorded in Atlanta, Georgia — a move that gave the band the opportunity to view themselves from a new perspective. "In a weird way working in America has been good for us, because unlike some bands who work in America and end up sounding American, I think it's solidified how British we are," says Wilson.

They hired Ben H. Allen III as producer, impressed by his expressive work on recent albums by Animal Collective, Deerhunter and Youth Lagoon, as well as his production for Gnarls Barkley and Cee-Lo Green. They sensed he shared their hunger and ambition, while having few pre-conceived ideas about what Kaiser Chiefs should be. "He knew that we were going for it," says Wilson. "I'd go in and do a vocal take, and then I'd say 'Don't you think it sounds a bit…?' And he'd say 'What? Successful?'"

"They came really ready to prove something to the world," says Allen. "And the songs are really good. And that's what I'm always looking at – it's not a band's reputation or where they're at or what the budget is, it's the songs. There's a lot of interesting-sounding bands in the world, but there's a distinct lack of songwriting and that means there's not as much longevity for some of these bands. These days, personally, I'm looking for bands that are hitting for the fences."

'Hitting for the fences' is probably the most accurate way to describe the songs on Education, Education. They are gimlet-eyed bruisers, spoiling for a fight; muscular, anthemic, proud. From the irresistible swell of Coming Home to the forlorn drift of Roses, via the relentless march of Cannons, they paint a compelling portrait of the modern age: factories, labour exchanges, battlefields, there is mud on boots, homesickness, love and loneliness. They are songs charged with musical experimentation and ambition, with wurlitzers, belly laughs, guitar solos, but that never lose their emotional connection, Wilson's lyrics infused with rage, sorrow, a sense of loss.

But above all these are songs carried by the pluck and romance of hope. This is a band reformed and recharged, they say, a band that knows just what's possible with faith and solidarity and a refusal to accept defeat. "You and me on the front line, you and me and every time," runs Bows and Arrows, the album's battle-cry, an anthem for both this band and these times. "We the people, created equal," it storms. "We the people, created equal … And if that's true then we're not the only ones."