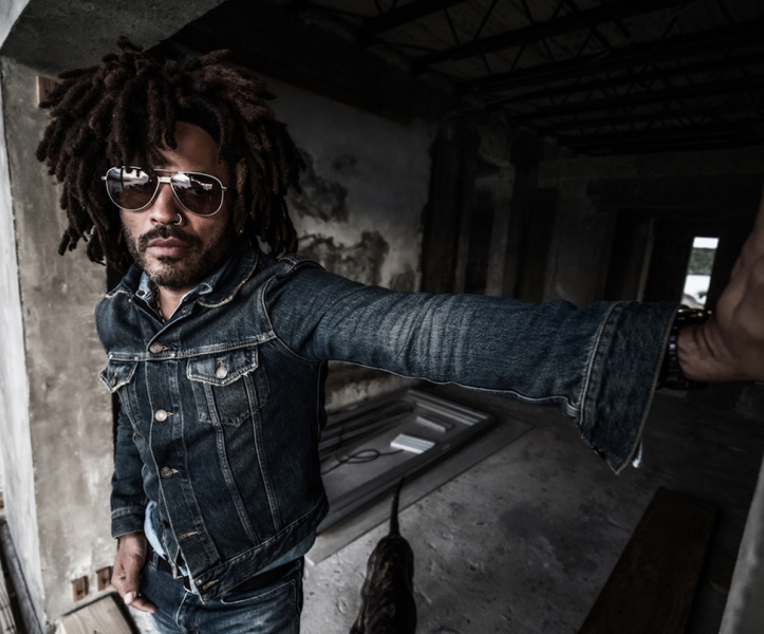 For his ninth album, Lenny Kravitz found much of his inspiration close to home. In fact, the very spirit of BLACK AND WHITE AMERICA came from the locations in which the music was made—from a tiny, 400-person community in the Bahamas to the streets of Paris. And out of his experiences as a true citizen of the planet, his first new songs in three years became the most personal and diverse collection of his career. "No doubt, my environment definitely lends a lot to the creative process," he says.

While the island, the homeland of his mother's family, has long been a familiar sanctuary for Kravitz, in the last year he committed to the place in a new way. Fortunately, what emerged was a new level of comfort and clarity with his music. "I dreamt a lot of this music, sleeping in my trailer on the beach," he says. One morning, he recalls, he "just woke up and ran to the studio and this thing came out"—which turned out to be the ferocious, funk-style groove of "Life Ain’t Ever Been Better Than It Is Now." On the soaring, prayer-like piano ballad "Dream," he sings, "no one can take the dream from your heart."

Not that all of BLACK AND WHITE AMERICA—his first release on Atlantic Records/Roadrunner Records, and the follow-up to 2008's IT IS TIME FOR A LOVE REVOLUTION, which marked Kravitz's highest-ever debut on the album charts—was as mystical as those experiences. On other songs, he drew from his year in the secluded town in earthier ways.

"Down the road from where I live, there's a little place to get food, and at night, there’s a DJ," he says. "I was there watching these Bahamian women dance. Most of them happen to be very full figured ladies, and they're super-proud of their bodies. They wear shorter shorts, in loud colors and it's really encouraging to see that they are not buying the stereotypes of what the media says is beautiful."

Inspired by these women, Kravitz came up with "Boongie Drop," a simmering space-shuffle with a grinding, late-night groove ("in the Bahamas, 'boongie' is the word for 'ass,' so I just kept it cultural," he explains). Jay-Z, who has collaborated with Kravitz on several songs over the years, jumps on the track with some high-speed, island-inflected rhymes, while DJ Military, the actual DJ at the club and an old friend of Kravitz's, got his own chance to kick off the song. In addition to working with Jay-Z, Kravitz also joined forces with rapper Drake and Swizz Beatz on the track, “Sunflower.”

BLACK AND WHITE AMERICA took on another layer when Kravitz shifted his base of operations to Paris. "After I'd been in the bush so long, it was really interesting to hear this music in the city, while I was driving around," he says. "The attitude changed from hearing it in an urban environment." In Paris, he began the mixing and much of the synthesizer overdubs. It is there he also wrote a "really sensual, very minimal" song called "Liquid Jesus," bringing a sleeker and more sophisticated feel to the sound.

"A lot of this record seems to be influenced by what I was listening to in junior high and high school," says Kravitz. "Soul, R&B, bands like Earth, Wind and Fire, Quincy Jones productions like the Brothers Johnson—these were the type of records that taught me so much about producing and arranging music."

The album features standout tracks such as "Push," "Super Love," and "Come On Get It.” However, it may be the album's title track that gets the most attention. Over a springy, super funky-style bass line, Kravitz sings "There is no division…the future looks as though it's come around."

BLACK AND WHITE AMERICA was written in reaction to a documentary Kravitz saw about racism in the post-Obama United States. Amidst the defiant lyrics, the songwriter references his own family history, and the experiences of his parents as an interracial couple in the 1960s. "People used to yell obscenities and spit at them," he says, "and this was in New York City, not in the South. So it's about me personally and about the situation with race in this country. Maybe we are beginning to move on, but there's still a lot of people who want to hold onto their old ideas."

Though the sonic emphasis of BLACK AND WHITE AMERICA may land squarely on the funk, the force behind such guitar-driven smashes as "Fly Away" and "Are You Gonna Go My Way" hasn't turned his back on rock. Songs like "Rock Star City Life," and the first single, "Stand," give the album a healthy dose of crunching riffs.

“This album is a celebration,” he offers. “Anybody listening is going to feel it and be uplifted by the spirit of the music.”

The overwhelming emotion on BLACK AND WHITE AMERICA is the feel of optimism, faith and hope. Kravitz acknowledges that these tumultuous times make it difficult to maintain these beliefs. “This world is challenging place,” he says. “The interesting dynamic is when you are in the middle of chaos and you are able to find inner peace. I choose to remain optimistic, even in the face of negativity and destruction."

After so much time in creative lockdown, Kravitz is eager to take the BLACK AND WHITE AMERICA show on the road. First comes a handful of stadium dates opening for U2, which will be followed by a lengthy international run of stadiums, arenas, and theatres.

"Playing the new music live will be really inspiring," says Kravitz. "I have an amazing band, including a full horn section and singers. We’re gonna come hard," he says with a laugh.

For Lenny Kravitz, BLACK AND WHITE AMERICA represents a new peak in both the range and the focus of his music. "I think it's the best work I've done to date," he says. "It’s a great balance of where I’ve been, where I am and where I am going.”