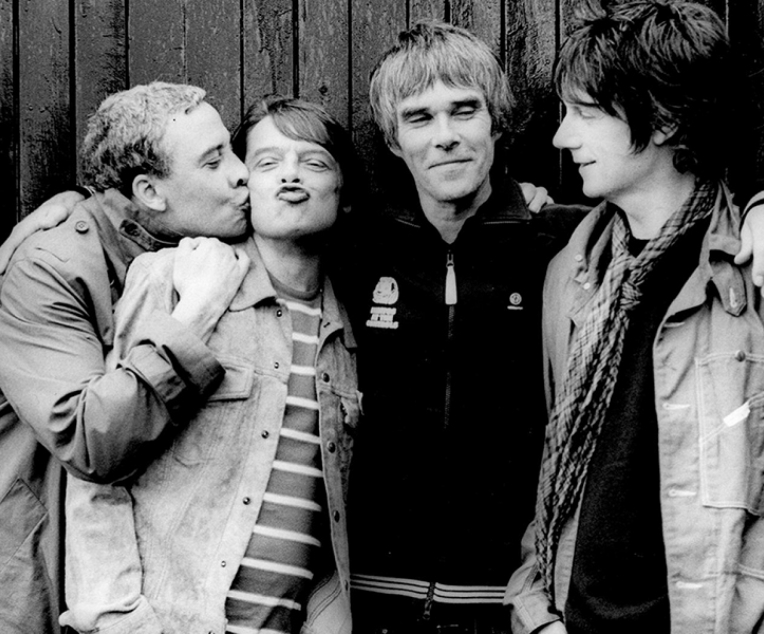 Ian Brown and John Squire met aged four in a local sandpit, however this was to be the first of many encounters since they lived on opposite sides of the street from one another on Sylvan Avenue in Sale, Greater Manchester. Despite attending different primary schools the two met up in Secondary School to form a friendship through a mutual love of punk. Something of a loner, Squire was the quieter and more self-contained of the two, while Brown was the 'lad about town' and this polarisation of personalities was to from the basis of their friendship. When John began to learn guitar the logical step of forming a band presented itself and he fprmed The Mill with a group of other budding musicians in the area. This band did not last long and Squire soon moved on to another band The Patrol. John encouraged Ian Brown to come along to their rehearsals and he soon found himself playing bass in the band.

Upon leaving school both found themselves in jobs they didn't want (Brown washing dishes in a hotel and Squire working as a clay modeller for local animation company Cosgrove-Hall) and this led to their adoption of the band as a serious escape from the 9 to 5 drudgery of life in suburban Manchester. However with his band seemingly going nowhere fast, Ian, a self-confessed 'drifter', set off on a hitch-hiking trip around Europe. This was to benefit the band massively since it not only provided songwriting inspiration (most notably in Made Of Stone), but it also gave them their first real gigs. A concert promoter Ian had met in Sweden had promised him a string of small gigs at some clubs there.

The band with Ian now on vocals, John and Andy Couzens on guitars, Pete Garner on bass and Simon Wolstencroft on drums set completed this low key series of gigs and headed back to the UK with much needed confidence and experience, a platform which they used to gain a one single deal with Manchester's Thin Line indie label in 1985. Recruiting Alan "Reni" Wren to replace Simon Wolstencroft, the band entered Strawberry Studios with producer Martin Hannet (Joy Division, U2) and started working on an album of material. However after a poorly received (both critically and commercially) debut single, "So Young", the band aborted their recording sessions and did not release any further material from the sessions.

Having taken a sabbatical the band, now consisting of Ian, John, Pete Garner and Reni, under the guidance of manager Gareth Evans - local businessman and owner of the Manchester International clubs - secured a deal which led to the recording and release of the 1987 single "Sally Cinnamon" on the FM Revolver label. The single made minor ripples in the Manchester scene at the time and attracted the attention of a number of record labels including London Records and Jive Records subsidiary, Silvertone. Meanwhile, local bass player Gary 'Mani' Mounfield who had previously played in The Mill with John and was well known to Ian and Reni, joined the band as replacement for the ousted Pete Garner and the 'classic' roses line-up was cemented.

Silvertone Records won the bidding war, signing the band to an eight album deal and hastily arranging initial recording sessions, with New Order bass player Peter Hook in charge of production duties. The band's first choice of producer, John Leckie (XTC), was invited to remix the band's Peter Hook produced recording of "Elephant Stone" and the result became the band's first A-side for Silvertone. The single's release in 1988 had a considerable impact on the local scene and heralded the band's arrival, but failed to repeat the success nationally.

John Leckie agreed to produce the band's first album and the resulting recording sessions in Manchester, London and Wales produced not only the band's album but also their 1989 breakthrough single, the seminal "Made Of Stone". The single was named the New Musical Express single of the week, made the UK top 40 and quickly gained the band cult status and a considerable following outside Manchester. A major tour of mainland Britain was lined up at the beginning of 1989 in support of the album's imminent release and the shows were met with plaudits from fans and critics alike. The release of The Stone Roses was met with fanatical praise from every quarter of the music media (with the notable exception of the NME), it was seen as a new direction in contemporary guitar music - soaring highs, sweeping choruses and beautiful melodies.

The album managed to break the UK top 40 and saw the band emerge from cult status to gain the ubiquitous "next big thing" tag. The release of "She Bangs the Drums" propelled the band even further and gave them the clout needed to abandon the standard touring circuit and instead stage 'events'. The first of these was their August the 12th appearance at the Empress Ballroom in popular English seaside resort Blackpool. 4000 fans made their way to what was to become one of the band's most celebrated gigs, wandering onstage playing with a yo-yo, Ian declared "Manchester in the area" to the faithful, a blistering set of classics followed and the gig became the stuff of legend. The follow up trip to London's Alexandra Palace was pulled off with much less aplomb. The band had used the services of a friend as sound engineer, however he did not have experience with gigs of this size and consequently the PA was woefully inadequate and many fans were disappointed.

Brushing aside this temporary set-back, the band entered the studio to begin recording their legendary double a-side single "Fools Gold/What the World Is Waiting For", again with John Leckie. By now the media interest in the band was at fever pitch: appearing on the covers of NME, Sounds & Melody Maker, interviewed on the BBC2 TV show Rapido and appearing on the BBC2's The Late Show. The latter appearance marked by the failure of the television studio's sound system one verse into "Made Of Stone" and Ian Brown's subsequent vocal discontent heard in the background over the voice of the luckless presenter.

Around the same time the 'Manchester scene' had developed around the Stone Roses/Happy Mondays axis, this was both a cultural explosion - kids in flares, baggy tops and "Reni hats" - and a media godsend. The band's "Fools Gold" Top Of the Pops appearance alongside fellow mancunians Happy Mondays represented for many a "cultural high-water mark", a decade of bland guitar and synth bands finally laid to rest by the revolutionary sound of 'baggy' at its best. "Fools Gold" and the Mondays' "Step On" were representative of a new direction - house music and acid culture combining with the effortless cool of indie guitar music to produce an astonishingly broad minded sound.

Until this point acid house culture had been practically outlawed, illegal warehouse parties the only outlet beyond the record shops. The media seized on the idea of an ecstasy fuelled 'Manchester scene' and combined it with outrageous hyperbole to stir interest and sell papers. The scene was very quickly commercialised - Factory Records copyrighting of the term 'Madchester' following the Happy Mondays EP of the same name, was just one of many attempts to capitalise on the movement.