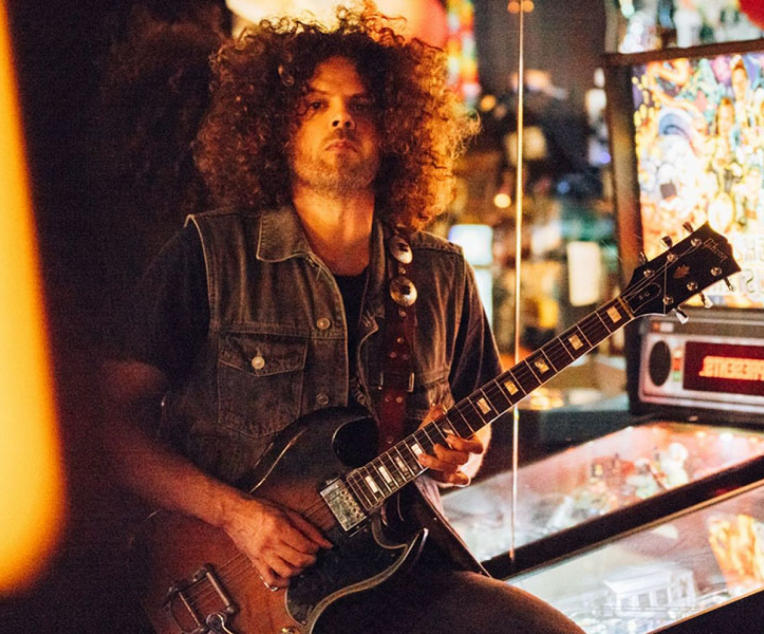 Pitchfork praised the songs for striking “a balance between meaty vintage metal and crisp, stoner-rock melodies.” NME said it ticked “the requisite boxes for all great rock & roll” and called it “utterly, utterly thrilling,” and Q Magazine called it “immense fun.”
When it was released in 2005, Wolfmother’s eponymous debut was exactly what rock & roll needed: a meaty, beaty, big and bouncy genre resuscitator that not only broke through to the mainstream, but broke big.

No wonder Rolling Stone named it one of the best albums of the year.
Led by vocalist/guitarist Andrew Stockdale, Wolfmother have amassed a global fanbase, played to packed-house crowds around the world, delivered show-stealing sets at star-studded festivals like Coachella, Lollapalooza and Reading and Leeds, and have been invited to share stages with rock icons Aerosmith and AC/DC. For their induction into the UK Music Hall of Fame, Led Zeppelin personally invited Wolfmother as their guests (the band showed their appreciation by delivering an electrifying cover of “Communication Breakdown”).
For most artists, such accomplishments usually mark the culmination of a career – if they’re lucky.
But ten years after their arrival, Wolfmother have returned with what could arguably be called their best work to date. With Victorious, Stockdale once again arrives right on time: in an era dominated by single-song downloads, this is an album worthy of repeat listens from top to bottom. Following 2009’s Cosmic Egg and 2014’s New Crown, the much-anticipated Victorious (Universal Music Enterprises) is an electrifying testament to the range and depth of Stockdale’s artistry. Recorded at Henson Studios in Los Angeles with two-time Grammy winning producer Brendan O’Brien (Pearl Jam, Soundgarden, Bruce Springsteen), the songs are edgy, inventive and uncompromising and rank among the band’s best ever.
Stockdale began working on the record this past January at his Byron Bay studio in New South Wales, writing on every instrument and embracing the same creative approach he used on the band’s debut album a decade ago.

“Back in the early days, I’d play guitar, bass, and drums and then present the ideas to the band and we’d work on the arrangement together,” he says. “I thought it would be cool to get back to demoing ideas by myself and playing everything. It’s a good way to do things because it can make the style more cohesive.”
In addition to vocals, Stockdale played guitar and bass and brought in Josh Freese (Nine Inch Nails, Bruce Springsteen, A Perfect Circle) and Joey Waronker (Beck, Gnarls Barkley, REM) to split drum duties.

About working with O’Brien, Stockdale says, “I did the last record by myself, so it was good to get back to working with a producer who could help with arrangements and have a responsibility to maintain the sound. Brendan’s a very musical producer, and he had a great understanding of the songs.”
The first single “Victorious” swings from a propulsive riff and pronounced drum stomp into a gargantuan, triumphant vocal hook. “I bought this weird-looking eighties metal guitar,” he recalls. “It just looks hilarious and I was playing all of these riffs for 20 minutes, pairing them with drums. The lyrics came out of nowhere. It felt so natural. The words had a certain ring to them.”
The album announces itself with “Love That You Give,” tempering a rousing and raucous riff with a soulful vocal refrain and vibrant lyricism. “I had a couple of drinks and started writing,” he says. “By the end of the day, it was done. Nothing changed from the demo. The lyrical theme is, ‘How do you react to adversity or difficulties in life?’ You try to be proactive and put something positive back into the world instead of buying into other people’s aggression, negativity, or hatred. You’re counteracting emotions that get thrown at you.”
For the cinematic “Pretty Peggy,” he strips everything down to an acoustic guitar and delicate beat, then illuminates his dynamic range over the sixties-style strut and handclap of “Best of a Bad Situation.”
He recalls how the latter came together: “There was a huge storm approaching Byron Bay. All the streets were flooded, and they were telling everyone to stay home, but I drove through it, went to the studio, and started listening to all these Small Faces songs with Rod Stewart. I wanted to do something upbeat like that.”

About the thick-grooved “Gypsy Caravan,” Stockdale says, “the title references the transient lifestyle. When people finish high school, they want to backpack around the world. When people retire, it’s the same thing; they want to get an RV and ride around. Things are constantly moving. There’s a romantic notion of the musical life, but wanderlust truly unites all of us.”
Ultimately, Victorious is meant for the road – that’s where Wolfmother roars to life. “We wanted to get back to that big sound,” says Stockdale. “It’s this balance of garage-y energy and big production. It’s wilder and more energetic—and perfect for a festival main stage.”