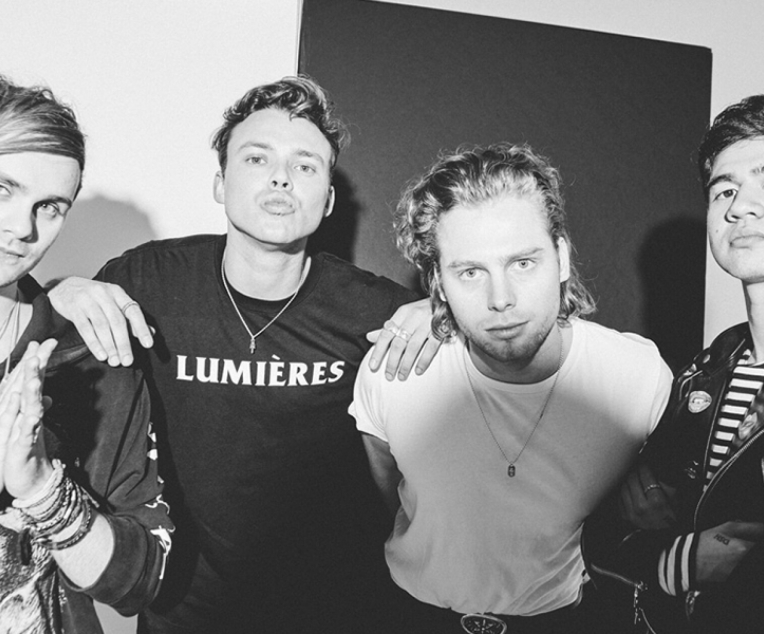 5 Seconds Of Summer (also known as 5SOS) is an Australian band consisting of members Luke Robert Hemmings (born 1996), Michael Gordon Clifford (born 1995), Ashton Fletcher Irwin (born 1994) and Calum Thomas Hood (born 1996). They were first formed in Sydney during 2011 and began posting Youtube videos. Luke on vocals and guitar, Calum on vocals and bass guitar, and Michael on vocals and guitar. In December 2011, Ashton joined the band on vocals and drums. During 2012 they released an EP called 'Unplugged' which reached number 3 on the iTunes chart in Australia and in the top 20 in New Zealand and Sweden. Their international fanbase continued to grow when One Direction's Louis Tomlinson tweeted a link to their song 'Gotta Get Out'. When 5SOS released their first single 'Out Of My Limit' in November 2012, One Direction's Niall Horan tweeted the link to the video clip. On 14 February 2013, it was announced that 5 Seconds of Summer would support One Direction on their worldwide Take Me Home Tour. Whilst on a break from the Take Me Home Tour, 5 Seconds of Summer returned home to Australia where they played a National headlining tour, with all dates selling out within minutes. It was around this time when the band began to gain popularity and become more well-known. On 21 November 2013, the band announced that they had signed to Capitol Records. On 5 February 2014, 5 Seconds of Summer listed their debut single 'She Looks So Perfect' for pre-order on the iTunes Store which was released in late March. On 5 March 2014, it was announced that 5 Seconds of Summer will once again join One Direction on the road, supporting them on their 2014 Where We Are Tour in the US, Canada, UK and Europe. On 9 April 2014, the 'She Looks So Perfect EP' debuted at number 2 on the Billboard 200. In June 2014, their first album called '5 Seconds Of Summer' was released.