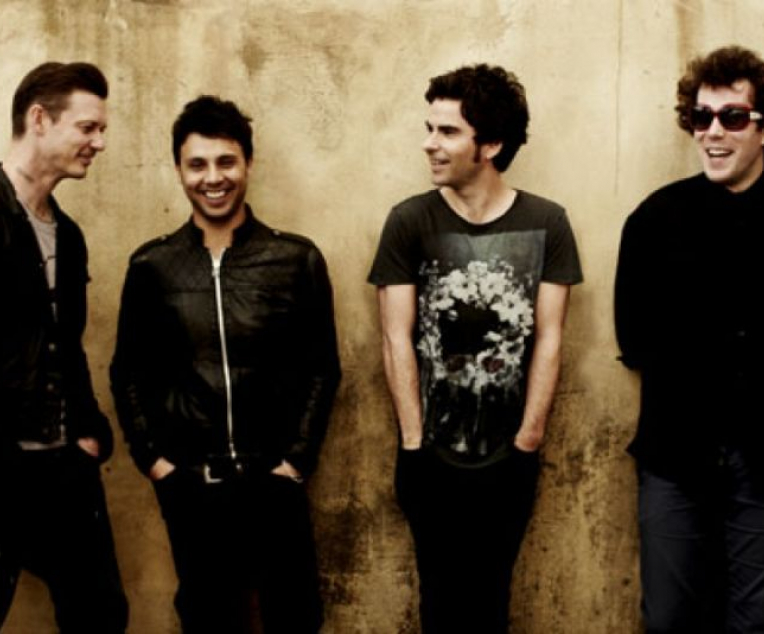 "Jones’s voice is a killer instrument too, simultaneously raw and mellow, while his lyrics nail the disdain, boredom and affection inherent in small-town life." Q on Kelly Jones.

"On tunes such as ‘Not Up To You’ his drum patterns breathe life into the song and momentum into the show." The Times on Stuart Cable.

"...just like any other bass player - hanging back and looking cool." Richard Jones defines his role for Kerrang.

If there's a dictum that seems to follow Stereophonics wherever and whenever, it is 'Act local, think global'. Over the space of only four years, two albums, numerous singles and countless tours they have tirelessly made the most out of every opportunity presented to them.

Stereophonics are Kelly Jones (guitar, vocals), Richard Jones (bass) and Stuart Cable (drums). All three members were born and grew up in the South Wales village Cwmaman. Kelly and Stuart lived on the same street. Richard and Kelly were in the same class at school. Kelly was playing in bands with the older Stuart from the age of 11; a few years later Kelly and Stuart got Richard in the band because 'he was the coolest fucker in town.'

At the beginning of 1996, however, times were tough. Having been toiling for some time under the moniker of 'Tragic Love Company' (inspired by three of their favourite bands The Tragically Hip, Mother Love Bone and Bad Company) the band were, if not going nowhere, not going anywhere that fast. One name change - taken from Stuart Cable's antiquated radio set - and one year later, Stereophonics had signed a record and publishing deal, shared the stage with Manic Street Preachers and The Who, to name but a few, and released their debut single.

Stereophonics released their debut album in August 1997. 'Word Gets Around' entered the UK Charts at number 6, a result based on pure old-fashioned touring. During the course of the year the band racked up their first three top 40 hits ('More Life In A Tramp's Vest', 'A Thousand Trees' and 'Traffic'), yet none of them were awarded anything more than cursory National radio play.The music press were in the main responsive, but the band did not grace a magazine front cover until early '98.

By the time Stereophonics played their Christmas shows in Cardiff 'Word Gets Around' was certified Gold and has subsequently gone on to sell about a million copies world-wide. It's combination of Kelly Jones' inspired tragi-comic observations and rousing, triumphant tunes were summoned from a rich vein of rock'n'roll storytelling and connected immediately with an audience that covered generations, genders and cultural tribes. In February 1998 these marvellous fans voted Stereophonics the best new band of the year at the Brit Awards. Immediately, a re-release of fans' favourite 'Local Boy In The Photograph' became the band's highest chart entry, and finally the band were play-listed on National radio.

Spring '98 saw Stereophonics take their music abroad, with tours of Europe and USA. The band then interrupted the writing and recording of their second album with a headlining show in the grounds of Cardiff Castle (the first band to play this prestigious venue for over 20 years). The day after, Stuart broke his ankle playing football, but the band still managed to fulfil their commitment to play Glastonbury a few weeks later.

A summer of festival appearances at home and away in Europe were followed by the completion of recording, and a new single 'The Bartender And The Thief' came out in November 1998. With a video shot within view of the Bridge over the River Kwai in Thailand and a sensational sold out UK tour this raw, raucous song of con-men and lesbians reached number 3 in the UK charts - their highest yet.

In Spring 1999 Stereophonics released their second album, 'Performance And Cocktails'. The record was a further distillation of the band's simple, affirming music and Kelly Jones' idiosyncratic storytelling and it entered the charts at number one. With four more hits over the course of the year ('Just Looking', 'Pick A Part That's New', 'I Wouldn't Believe Your Radio' and 'Hurry Up And Wait'), the album has remained near the top of the album list for the last eighteen months.

In the Summer of 1999 Stereophonics co-headlined T In The Park in Scotland, and topped the bill at their own 50,000 capacity event at Swansea's Morfa Athletics stadium. The show sold out before the supporting cast were announced. With fans in attendance from all over the country and some hardy souls from even further afield the event was a truly moving send-off for the venue - it was bulldozed the next day.

1999 ended with a set of US dates, a sold out UK arena tour and a headlining billing at Cream in Liverpool on Millennium eve. Widely regarded as one of the albums of the year, 'Performance And Cocktails' was the fifth biggest-seller of 1999. The New Year started with another North American tour and another top 5 hit - this time a collaborative effort with Tom Jones. After a frenetic, non-stop two years, the band afforded themselves some quiet time (Richard moved to London, Stuart got married and bought a new house, Kelly set about writing the third album).

Summer 2000 saw Stereophonics decamp to Real World Studios in Bath to record their third long-player, breaking only to headline the Reading, Leeds and Glasgow three-site festival. Released 9th April 2001, the album entitled 'Just Enough Education To Perform' was exclusively previewed by Kelly Jones on his debut solo acoustic tour. After two solid years of supporting then mostly headlining the biggest venues in the country, Kelly seized the opportunity to showcase the band's newest songs in the purest form - Kelly, Richard, Tony and Scott have also just performed the acoustic tracks on a sold-out North American tour.

(At time of writing, 'Performance And Cocktails' is still in the UK album charts, and has been rated 4 times platinum and has sold more than 2 million worldwide. 'Word Gets Around' is currently not far short of double platinum status. A platinum disc is award for 300,000 album sales.)