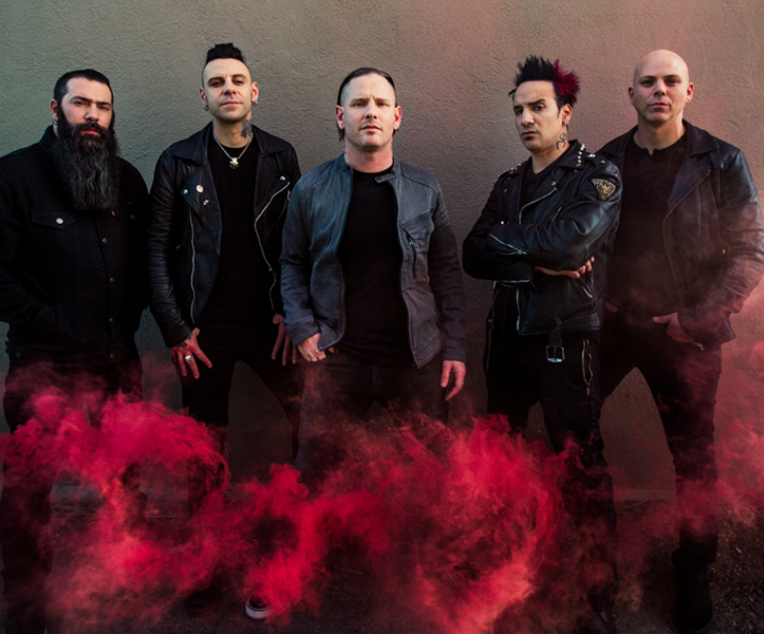 As intoxicating as the libation it was named after (1 part whiskey and a splash of orange juice and sour mix), Stone Sour is a Molotov cocktail of an album - 1 part pure rock adrenaline with a splash of melody. “We are melodic hard-rock with content and initiative,” explains Stone Sour vocalist Corey Taylor. “Stone Sour allows me to execute the writing style that I love and can't necessarily do with Slipknot.” While still embracing the heaviness true to the fundamentals of Taylor and Root's other band, Stone Sour offers a more introspective and intimate take on music, thus the absence of their masks while performing with Stone Sour.

Originally formed in 1992 by Taylor and drummer Joel Ekman, Stone Sour is the product of ten years' worth of determination, patience and creative expression. Longtime friend of Taylor's, bassist Shawn Economaki, joined the fold soon after the band's inception. With no real predetermined sonic direction other than writing good songs, Stone Sour played clubs with a multitude of different guitarists, sometimes having someone fill the spot for just one show. The turning point came in 1995 when guitarist Jim Root – who later joined Slipknot with Corey Taylor - found his way to a practice. This was a defining moment in that it signified the completion of a band as a unit. For five years, Stone Sour generated music for the sheer passion of it not concerning themselves with any particular genre, rather maintaining a sound based upon good hard rock, killer melody and emotional peaks and valleys.

But in 1997, disenchanted and burnt out, Taylor quit Stone Sour to join Slipknot, leaving the others to go their separate ways. Joel started a family, while Jim joined Slipknot a year after Corey. Shawn went on to be stage manager for the 'Knot. The legacy that Stone Sour had created remained a glass half full.

Or so it seemed.

In 2000, guitarist Josh Rand, another old friend/collaborator of Corey's and former Stone Sour alumni, approached Corey with some songs he had been working on. Together they would spend a year and a half writing what would eventually become Stone Sour. Upon completion, the duo determined that what they had crafted was of such high quality and so true to the roots of the original Stone Sour that it was only natural to enlist the members who initially made it happen. Almost a full decade after the band's inception and six years after they had played their last show, all of the original members reconvened in Des Moines. Lineup solidified the band faced the task of picking a name. Eventually after a few different ideas (Project X, Superego, Closure) were scuttled, the decision came quickly. With a band of members that already had the chemistry of years of playing together, one option stood out-- Stone Sour was back.

As Taylor states, “The difference this time around is that we lost the fear of trying to compete with what is popular. We are going to stay true to the type of music that we want to make, and no matter who likes it or not, I am still secure that we have produced a great album.” Boasting a surprisingly varied selection of songs, ranging from the poignant “Bother,” which can also be heard on the platinum-selling SpiderMan “Music From and Inspired By” Soundtrack, to the aggressive collage of sound that is “Get Inside”, Stone Sour is in Taylor's opinion, raw, emotive rock in its purest form. “With this band, we just go in to churn out good hard-rocking songs.”