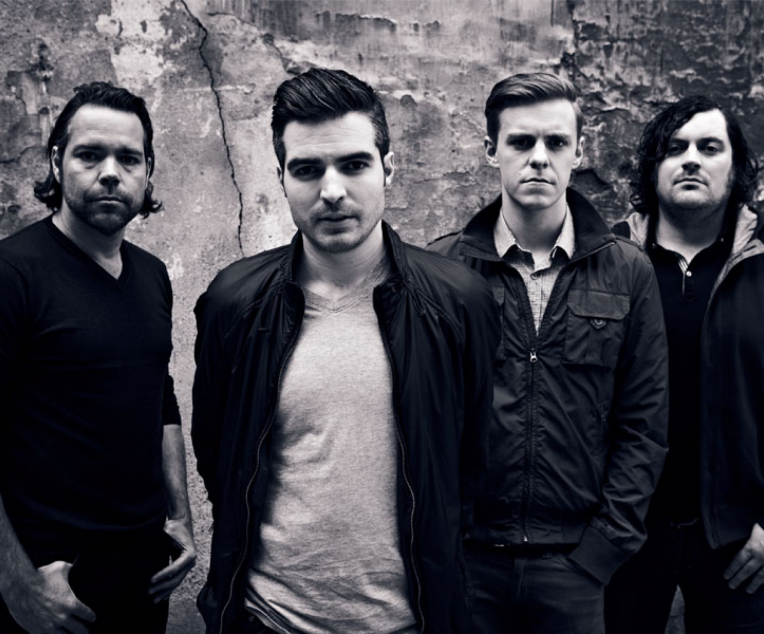 Just sometimes, good things come to those who wait. In an era of overnight success, where last year’s Next Big Things are often forgotten a mere 12 months on, The Boxer Rebellion offer convincing proof that the only success worth having is the kind that is earned the hard way. The London-based quartet are about to release their new album, ‘Ocean by Ocean’, their fifth in a career now into its 15th year. Fifteen years is more than most bands manage; it’s more enduring than the average marriage. “We have spent a lot of time chasing dangling carrots,” is how singer Nathan Nicholson chooses to sum up what it feels like to have been on the brink of the big-time – critical darlings often within a finger’s reach of that life-changing hit single – for so long now.

That ‘Ocean by Ocean’ is an accomplished, beautifully orchestrated and impeccably freighted album should hardly come as a surprise – this is, after all, an act that knows precisely what it is doing, and how to do it – but there is a depth of emotion to every one of these 10 songs here that lift each towards the hymnal. And so surely, this time, it will indeed translate to the masses, for like other great cult acts before them – Elbow, The National – their time has come, their crossover imminent.

The Boxer Rebellion are a London quartet that never did quite conform. The singer is from Tennessee, for a start. Nathan Nicholson arrived in the capital on the cusp of a new century when he was barely out of his teens, and hungry for the kind of culture he felt was largely absent from America’s south. “I’d been a huge fan of British pop and rock, and Britpop in general,” he says, “and I came wanting to immerse myself in the scene as much as I could. ”He points out that he did try to do this at home first, but it didn’t go down too well. “I used to wear my Clarks Wallabees everywhere I went.” He laughs. “I guess I looked a bit of a douche bag.”

In London, he looked less of one. And it was here he met three like-minded individuals: Adam Harrison on bass, Piers Hewitt on drums, and Todd Howe on guitar. In 2001, the band was officially born, and quickly came to the attentions of Alan McGee, who signed them to his short-lived, post-Creation label, Poptones. “If nothing else,” says Piers, “it brought us a lot of mainstream attention.”

It did. Several major record labels zoned in on them, but most simply expressed an intention to mould the band until they sounded like pretty much everyone else of the era. The Boxer Rebellion, however, have always been independent of spirit, and have never sounded quite like anybody else. Their sound is brooding and ruminative, glacial, Nathan’s rising falsetto casting an eerie lava lamp glow on songs that sound good before midnight, and even better afterwards. For a band of early Oasis fans, they sounded nothing like them – as 2005 debut album ‘Exits’ proved – sounding instead both out of time and place, individual in an era of identikits. “We’ve always believed in our music,” says Piers, “and that’s what has kept us together all these years. There were times we did well and got a lot of attention, and then there were the wilderness years, but we just kept at it because we knew we were onto something.”

In 2007, they recorded their second album ‘Union’. They knew that they had created something special here, a belief that kept them plugging away at it until, in 2009, they finally secured its release, on their own label. Haunted by Talk Talk’s elegiac soundscapes, and Sigur Ros’s celestial melodies, it was cinematic and hypnotic. And it quickly came to the attentions of iTunes, which made its first single, Evacuate, their worldwide single of the week. The album now had a global reach, and they quickly made chart history by becoming the first ever unsigned act to enter the Billboard Top 100 in the US on digital sales alone. “That felt like we were doing something right,” says Nathan, “and that our music really would reach a worldwide audience.”

Two years later, they released ‘The Cold Still’, produced by the legendary Ethan Johns and recorded at Peter Gabriel’s Real World Studios. It was here they met and hung out with Guy Garvey, who was there recording with Elbow. “Such a lovely man,” says Nathan. “Such an inspiration.”

Like the songs on ‘Union’ before it, several tracks from ‘The Cold Still’ were handpicked for use in TV series and feature films, which means that anyone who has watched, over the years, NCIS, Grey’s Anatomy, One Tree Hill, Nikita, The Vampire Diaries, Lincoln Heights and Shameless will be, perhaps unwittingly, already familiar with their music. “That was very gratifying,” Piers says. “It helped get our songs out there without heavy radio play. Plus, we’ve always seen our music as cinematic, so to have other people see it that way too was like validation.”

And then, in 2013, they released their fourth album ‘Promises’, about which All Music said: “The Boxer Rebellion have once again delivered a set of yearning rock anthems, full of searing romanticism and brooding atmosphere. The release ranks as one of their best.”

In 2014, the band had a lineup change. Original guitarist Todd Howe left, and was replaced by Andrew Smith. They then began work on ‘Ocean by Ocean’ as men to some extent settled in their lives: in their 30s, in relationships, as fathers. All of which, says Piers, has greatly inspired their sound. “We always wanted to write songs that represented us honestly, that sounded significant, that stopped people in their tracks.”

‘Ocean by Ocean’ is a transcendent record infused as much with darkness as it is light. There is brooding melancholy here that often translates into an emotional sucker punch. In ‘Let’s Disappear’, for example, Nathan sings about craving to hide away from, as he puts it, “everything that’s going on in the world”. ‘Redemption’ reels with the hard-won wisdom that can only come with tirelessly following your goals (“You say what a fortune to be given every dream you conceive”), while first single ‘Big Ideas’ is, says Nathan, concerns missed opportunities. “It’s about meeting someone special but at the wrong time in your life. You feel lucky to have met them but also, because of the bad timing, like you have the very kind of worse luck.”

The album’s opening track, ‘Weapon’, is deliciously ambiguous, a radio-friendly hit-in-waiting drenched in a chiming production evocative of the 1980s, but that reveals itself, on closer listening, to be haunting, and wholeheartedly sinister. “I believe I know you better than you know yourself,” Nathan sings. “You are a weapon/Destroying all I see.” And then there is ‘Pull Yourself Together’, so otherworldly and plangent it recalls nothing less than the Cocteau Twins. Sounding like it was recorded in a cathedral, it runs: “Pull yourself together/Take everything you need/Open up to open arms.”

It’s the most exquisite thing they have ever recorded. The album closes with another career highlight, ‘Let It Go’, not, mercifully, a cover of the tune from Disney’s Frozen, but a lament inspired by Nathan reading to his two-year-old son, and reminding himself of his place in the world. “I choose to feel happy,” he sings, “so why do I feel so sad?” If this is the sound of the existential angst of a man approaching midlife, it is rendered impeccably poetic. “I think I’m really bad at realising my lot in life sometimes,” Nathan says, ruefully. “I have to remind myself that, you know, my life is pretty amazing. I’m in a band I really believe in, and I’m proud to be a part of. I always was, and always will be.”

Music is transient, and bands come and they go. Rare are the ones that stay the course, rarer still those that get better over the years until quietly, astutely, they deliver their classic.