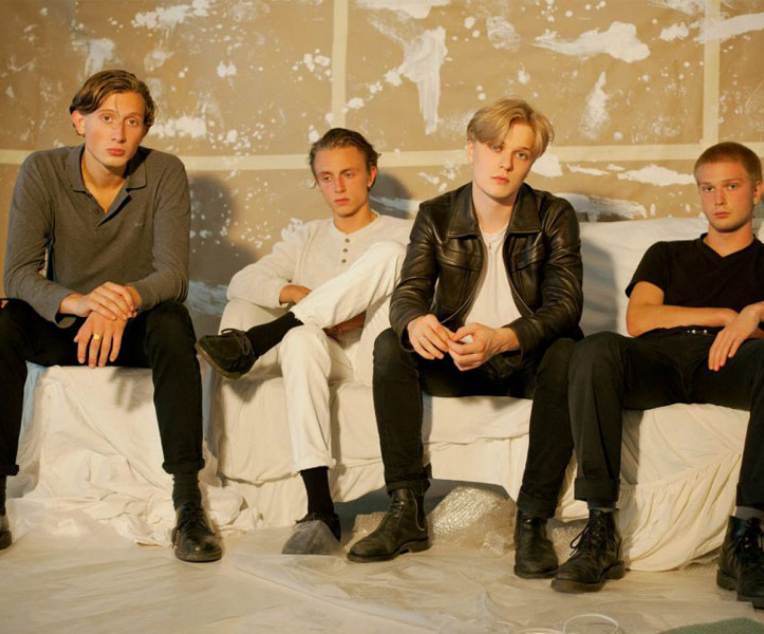 Communions are a four-piece from Copenhagen made up of brothers Martin and Mads Rehof, Jacob Van Deurs Formann, and Frederik Lind Köppen. ââBlue is their new album on Fat Possum Records.

There was a time when Communions were all eyes—together, they held your attention with a gritty desire, and it never felt like they were going to slow down for you. They rose to the occasion, but were yet to realise what they had in hand.

It was with a romantic naiveté that the âCommunions EP cleverly toyed with themes of introspection and restless youth. Between themselves they discovered a distinct, ethereal soundtrack that invited you to just see what might happen. When the break of dawn can light your cigarette, flirting is a poem to the present.

Incubated by Copenhagen's infamous venue-cum-rehearsal space, Mayhem, they wilfully took chances with their music to see if they could arrive somewhere else. It was the band's conviction that let them land here intact, and with a collection of songs that chart their journey. You don't need to know where you are going to know that you want to get lost.

Hand in hand, it ain't fair, all these roads, they lead nowhere.

Blue makes the most of everywhere Communions have been. And through all of this the stakes have changed, but the sensitivity and craft with which the band takes risks has bloomed. An eloquence now shines through, and you can take it or leave it. Discarding some of the moodiness found in their previous recordings, âBlue tells us what was always natural to Communions. It's about love, and taking chances, it'sâ about trying âsomething, and it still doesn't matter if there's apprehension—it's better when you're too busy to notice. The youthful confusions and exaggerated sentiments are there, though this time it's captured with a newfound maturity. It's a change in perspective presented in pop. Thankfully, their hearts have never left their sleeves.

The opening tracks of âBlue prime us for the ride. 'Come On, I'm Waiting' rallies us with a rhythm that punches and a lyric that doesn't start with introductions, peaking into an anthemic call. The following track, 'Today,' is peppered with a wistfully mournful guitar that propels the song along, washing over Rehof's wry cry of intent.

The band stalks new territory with a distinctive edge on 'Midnight Child.' Their effortless way with melody is wound tight into what feels like an aching glance across a dance floor. On 'Don't Hold Anything Back,' we soar on a blissed-out, hyper-real summer day. It cuts through the album like the statement the band were always dying to make. It has the heady lust of their earlier recordings, but with a tough-but-tender stare.

â No hesitation 'til the morning sun.

Communions have brought everything they wereâ brooding over into focus with âBlue. A love song's a love, but a love song with a heart of its own beats louder. The band are louder and clearer, and the immediacy of the experience is stunning.

Start over, it's just begun.