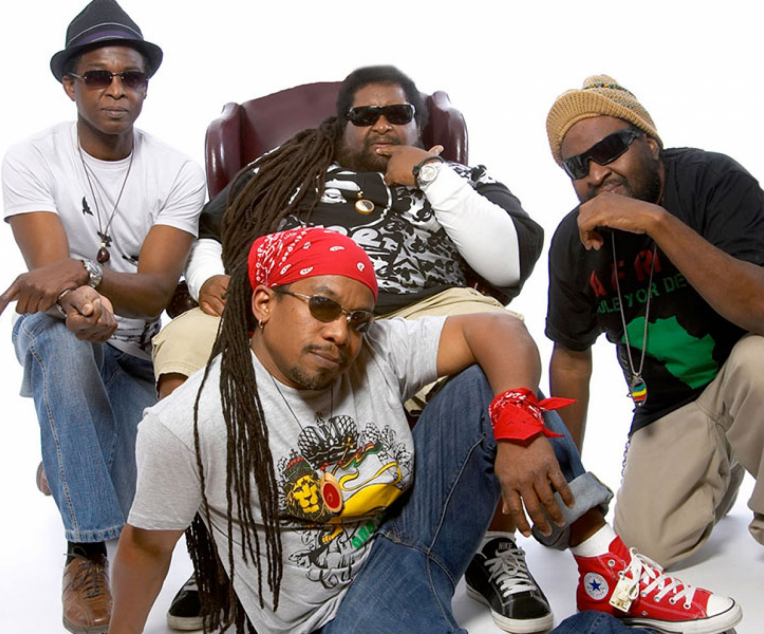 To many American listeners INNER CIRCLE is known chiefly for two songs –the gritty outlaw anthem “Bad Boys” the theme song of the long-running Fox TV series Cops, and the irresistibly upbeat dance number “Sweat (A La La La La Long).” Both of these belong to that rare group of tunes that have transcended their status as chart hits to enter the cultural lexicon.

To anyone who’s familiar with the band’s 20 year plan plus history in the reggae field and their immense popularity around the world- there’s much more to INNER CIRCLE than what meets the eye. Indeed, this Jamaican-bred, Grammy winning quintet is one of the world’s most respected reggae groups with a long string of successes stretching back to the mid- 70’s.

INNER CIRCLE’S special brand of pop-oriented Jamaican beats and energy-filled live performances have allowed the band to transcend the traditional reggae niche and enjoy widespread crossover appeal. A testament to this is the fact that INNER CIRCLE plays at many of the world’s largest music festivals-headlining alongside such towering pop and rock music icons as Elton John, Peter Gabriel, Van Morrison, Sinead O’Conner, The Black Crowes, Jimmy Page, Robert Plant, Carlos Santana, and many others.

Along the way, the group has withstood two-and-a-half decades of triumph and tragedy, thanks to a shared belief in music’s power to unite and heal, and to the intensely loyal sense of family that’s kept the band vital through some turbulent times.

INNER CIRCLE’S patented brand of upbeat eclecticism is inspiring as ever on the new album BIG TINGS, which is out on the band’s own SoundBwoy Entertainment label also being distributed by VP Records. The collection spotlights INNER CIRCLE’S trademark combination of cutting-edge modernism and traditional reggae roots. BIG TINGS contains 12 sizzling tracks and amongst them are some of INNER CIRCLE’S hottest songs, featuring collaborations with Beenie Man, Mr. Vegas, Anthony B., Luciano, and Glen Washington.

JAMAIKA ME CRAZY again touching on what is important to INNER CIRCLE, the spiritual world. Songs like Jah Jah We’re Calling’, Rivers of Babylon, Making a special dedication to Mother Theresa with feature artist, Jose Feliciano.

MONTEGO BAY, recorded, produced and mostly written by INNER CIRCLE’S long standing care of Ian Lewis, Bernard “Touter” Harvey and Roger Lewis (except the covers Maria Maria and Rain From The Skies), is also the latest project to be recorded at the bands’ own state-of the art studio, Circle House, in the quintet’s adopted hometown of Miami Beach. The unique facility combines the latest high-tech recording gear with the relaxed family vibe that the group applies to most of its activities. Although originally built exclusively for the band’s own use, the distinctly user-friendly studio has been tapped for recording projects by such diverse acts as Wu-Tang Clan, Bone Thugs N” Harmony, Luther Campbell, Carlos Santana’s new collaboration with The Fugees Lauryn Hill, Ziggy Marley, Jose Feliciano, Mariah Carey, Enrique Iglesias, Chayanne, Cash Money, Jessica Simpson and Ricky Martin.

BIG TINGS, JAMAIKA ME CRAZY, AND MONTEGO BAY are the latest entries in a body of works that started years ago, when brothers Ian and Roger Lewis founded the band in their hometown of Kingston Jamaica. With the additions of Touter Harvey and charismatic front man Jacob “Killer” Miller, Inner Circle recorded a series of well-received albums for the Trojan, Capitol and Island labels.

In 1978, while playing for the now infamous reggae Peace Concert ( a historic event documented in the film Heartland Reggae, which featured Bob Marley and Peter Tosh), the band achieved a major breakthrough when Chris Blackwell signed the group to Island Records. The same year, they achieved substantial commercial success with the Island album Everything Is Great, which became a Top 20 hit in the U.K and a Top 10 smash in France, and produced the popular singles “Mary Mary” and “Music Machine.” During this period, Inner Circle also became one of the first Jamaican groups on tour in the U.S.

The band’s burgeoning fortunes were shattered in 1980, however, when vocalist Jacob Miller was killed in a car crash. Devastated by Millers loss, the band did not return to the studio until six years with a new lead singer Calton. The regrouped combo was completed with the addition of drummer Lancelot Hall in 1985.

INNER CIRCLE achieved new levels of international success in the 1990’s. The title track of the album Bad Boys became a Number One hit in almost every European territory and sold approximately seven million copies worldwide; and Sweat (A La La La La Long) exploded across the world, simultaneously topping the charts in several countries in Asia, South America, Australia and New Zealand, as well as the European continent-where it became the most-played record ever in Germany and remained at #1 for a full three months.

After winning a 1993 Grammy for Best Album with “Bad Boys”, the band scored again with the 1994 album Reggae Dancer, which earned another Grammy nomination for Best Reggae Album. That disc featured the breezy “Summer Jammin” featured on the soundtrack of Eddie Murphy’s film Beverly Hills Cop III. Meanwhile, the durable “Bad Boys” became a hit again when it was used as a title song for the Will Smith/Martin Lawrence action film of the same name.

Unfortunately, at around this time lead singer Calton fell ill, necessitating a lengthy recovery period. In his absence, the band connected with Kingston native Kris Bently, former lead singer of the popular Jamaican group Skool and winner of the 1994 Caribbean Music Song Festival. When Calton opted for a solo career upon his recovery, the band invited Kris; whose personal magnetism and rapping skills added a new dimension to the band’s live performances to join permanently.

“Asia, India and the United Arab Emirates,” continues Lancelot Hall. “To some people a world tour is North America, Europe and Japan, but not us. If it’s on the map, we’re going there.” “Traveling around the world, you really learn that everybody is basically the same,” observes Ian Lewis. We are all one, regardless of our different ideas, and music is the best way to communicate that. Music is the highest language; it transcends all the things that separate people.”

In the New Millennium, this aura of all-embracing, positive, upbeat energy is palpable and it reflects the message of unity that’s more important than just a slogan for this durable, tight-knitted band. According to Touter Harvey, “The name INNER CIRCLE means family, and that’s what we are. We’re all devoted to the band and each other, and that’s what makes us strong.”