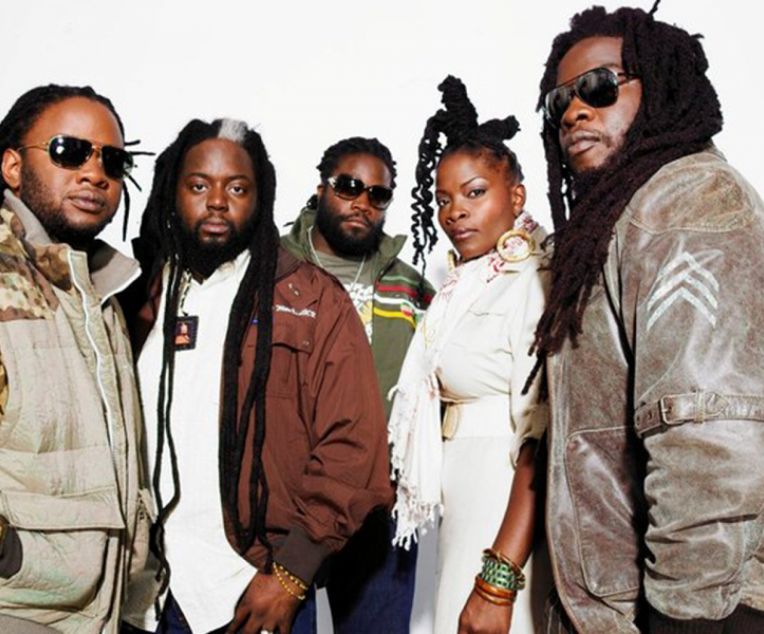 Described as one of music’s most influential reggae acts around today, the members of Morgan Heritage have returned with their 10th album, Mission In Progress, a new release that captures the band bottling the power of their stage performance on disc and infusing their songs with a heavier dose of hip-hop. Produced by Morgan Heritage (with a few songs helmed by Shane Brown and Stephen McGregor son of reggae singer Freddy McGregor),Mission In Progress lyrically finds the group continuing their quest to bolster their love for reggae music through romantic, street-wise and conscious songs built on slabs of spirituality.

Musically however, Mission In Progress is the realization of Morgan Heritage’s “ROCKAZ” concept: reggae music with an edge. "I think this record is the most aggressive one that we've ever done both musically and personally," says vocalist/keyboardist Una Morgan. "A lot of our inner feelings from growing up in the industry and the experiences that we’ve had touring the world, specifically in Africa, are reflected here and served as the inspiration for this album.”

The new album comes after the band’s second stint on the Vans Warped Tour, the most consistently successful festival in the States over the past 10 years, and a haven for harder-edge bands, especially punk acts. The give-and-take, tension-and-release moments the band has experienced on the Warped Tour comes across on Mission in Progress: the band made sure of it, replicating tricks they use onstage, like doubling a horn line with an electric guitar—thus giving a particular track a beefier sound.

“What we have worked on for the past three albums is to mainly bring the stage to record,” adds vocalist Peter “Jahpetes” Morgan. “A lot of people come to our shows and they’re like, ‘Wow, you sound so much better than your record, it’s unbelievable.’ And we’re like, ‘Wow, what is this difference that they’re noticing that’s not on the record?’ They say they love the records, but when they come to the concerts, they fall in love with the group all over again.

“A lot of those punk bands we’ve toured with on the Warped tour,” he continues, “when you put their record on, it’s the same energy that you get. We generate such a vibration at our concerts that it’s unreal, so we’ve learned that you can get that on record.”

But the record isn’t only aggressive. It veers from the hard-hitting and gritty to the straight-up romantic on songs like “Love You Right.” Says Una, “I love that song, it’s just a song between a man and a woman, and it just talks about how I’m loving what you did to me.”

The album's first single is "Raid Rootz Dance" a re-imagined and renamed cover of a Steel Pulse song ("Blues Dance Raid"). The release also features "Brooklyn and Jamaica," the group call's the first song to represent both the old neighborhood and their home for the past 11 years: Jamaica. Other standout songs featured on the album include the straight-up romantic track “Love You Right,” the sublime funk-fueled anthem “Nothing To Smile About” and the golden jam “Faithful.”

Born in Brooklyn’s tough Bushwick neighborhood, the band’s five members were raised in Springfield, Massachusetts, and spent their summer vacations back in New York’s hippest outer borough, where they returned after high school. “We’ve never written a song about where we come from and what we know about what we come from. Finally, it’s time to write a song about where we come from,” says Peter, who sings on the track “We don’t know nothing about Beverly Hills/We don’t know about working for the system/We don’t know about life on Miami Beach/But we can tell you about the streets/Just ask me about Brooklyn.”

The brothers and sisters came together for the first time professionally in 1982, when they recorded their first songs. “When people first heard the combination of Una, Peter and Gramps’ vocals, how they blended together, it was like magic,” says Mr. Mojo. “Everybody in our dad’s band was blown away that these guys could sound so good at such an early age.”

The band signed to MCA Records in 1992 (following a much-talked about performance at Jamaica’s Reggae Sunsplash festival), issuing its debut album, Miracles, in 1994, triggering one of the most impressive streaks in modern-day reggae since. In a dozen years, the band has racked up several hits in Jamaica and abroad, thanks in part to collaborations with such lauded Jamaican producers as Lloyd “King Jammy” James and Bobby Digital.

Through such singles as “Let’s Make Up,” “Don’t Haffi Dread,” “Down by the River” and “What We Need Is Love,” as well as such discs as 2001’s More Teachings and 2005’s Full Circle (both of which enjoyed extended stays in the Top 10 on Billboard’s reggae albums chart), the band has emerged as a bridge between reggae’s rich history and its promising future.

Raised with intensive vocal and instrumental training, the Morgan children were exposed to everything from the godfathers of roots reggae to top 40 American radio: everything from Duran Duran and Tears for Fears to Metallica and Van Halen.

“Morgan Heritage is a roots-reggae band,” says Gramps. “There’s a lot of rock and roll influence, but also a lot of R&B influence, and a lot of gospel influence. Vocally, it’s more like an R&B influence: James Ingram, Sam Cooke, Charlie Wilson, Stevie Wonder, New Edition, Sade, whatever was Top 40 in the ‘80s. That whole pack, that whole bundle is in Morgan Heritage.”

“The main point in Mission in Progress, says Gramps, “is that we’re on a musical mission, trying to take reggae to the next level, and put our stamp, and mark our history in reggae. Yeah, a lot of reggae bands have been here, and have come and gone. And there’s a lot coming, a lot here: There’s reggae bands from all over the world. You got German reggae bands, Italian reggae bands, Canadian reggae bands, Brazilian reggae bands. So what does Morgan Heritage bring to the table? We bring reggae music that rocks.”