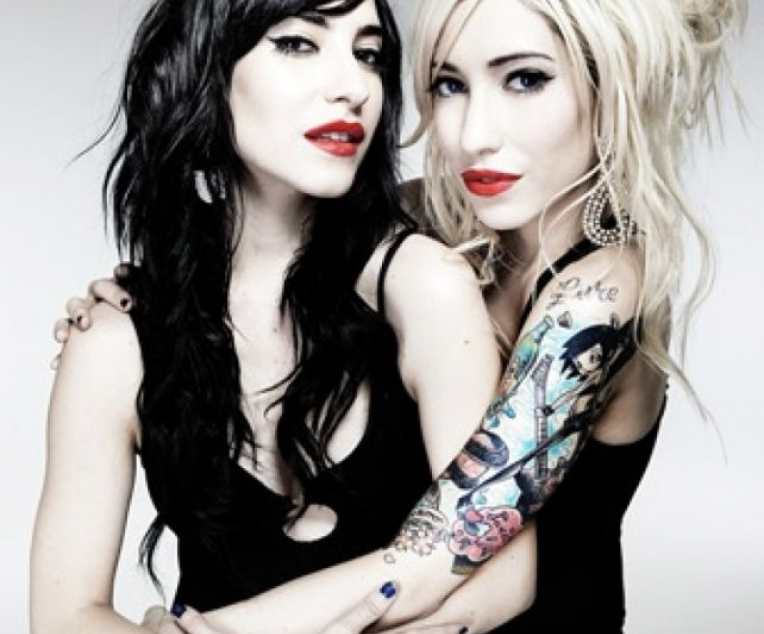 20 year-old identical twins from Brisbane Australia, Jess and Lisa Origliasso blend natural born singing and songwriting talent, looks to kill and a lifetime of performing experience to create an off the hook, irresistibly appealing debut album. If it all sounds too good to be true, The Secret Life Of The Veronicas, their dynamic Sire Records debut album kicks the “Wow Factor” up a notch or two. Simply put, The Veronicas bear no resemblance to your standard prepackaged teen dream. Tough and edgy with hooks and harmonies to spare, the Veronica's deliver a sound and lyrics that rock with the sheer joy of free spirits on the prowl, ready to take over the planet.

It gets better. Born on Christmas Day, for real, with a bond so strong they regularly finish each other's sentences, Jess and Lisa possess a wealth of show business skills, honed over fifteen years of live performing. Do the math, these girls began entertaining at the age of five, serving an apprenticeship which quickly made the stage their second home. It's that seemingly effortless ability to connect with an audience that's become a Veronica's trademark.

By their mid-teens, Jess and Lisa, drawing from influences as wide ranging as Roy Orbison and AC/DC, formed The Veronicas and began experimenting with everything from rock to hip hop to R&B, before hitting on a distinctive musical hybrid anchored by a unique harmonic blend found only in familial greats like the Everly Brothers and Oasis. It must be in the genes!

Signed to an exclusive production deal with Engine Room on the strength of their very first demo, Jess and Lisa spent the next year creating an impressive catalog of over fifty songs, many of which were written in collaboration with a Who's Who of world-class composers. Such was the buzz surrounding the pair that they were invited to work with proven hit makers the likes of Billy Steinberg (Madonna), Clif Magness (Avril Lavigne) and Rick Nowels (Dido). With songwriting jaunts to London, Los Angeles, NYC and Vancouver, Stockholm and points between, The Veronicas compiled an impressive collection of songs.

With a reputation for cutting edge music, Sire Records flipped for The Veronicas and the girls returned the kudos by signing on board. Work immediately began in Los Angeles on their major label debut, utilizing a team of top-flight producers that included, among others, Max Martin (Britney Spears), Don Gilmore (Linkin Park), Dr. Luke (Kelly Clarkson) and Toby Gad (Enrique Iglesias). “We were given a one-in-a-billion shot,” Jess remarks. “…And we were determined to deliver,” Lisa finishes.